Street light powered by wind and sun on trial in Palmerston North. 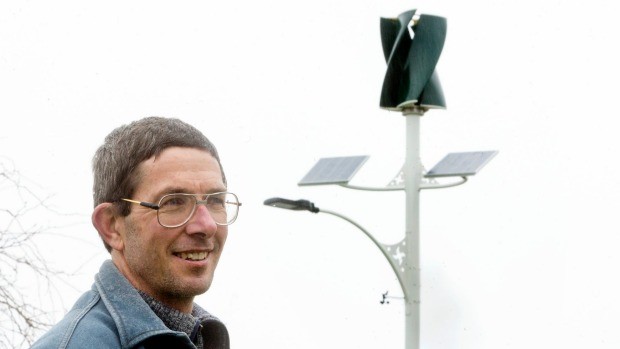 Palmerston North's first street light powered by the wind and sun has been installed at Hokowhitu Domain near the car park and playground.

The imported Eolgreen unit, worth $25,000 installed, has been provided as a demonstration unit in a collaboration with distributors Hiway Group for the cost to the city council of its concrete foundation.

The light unit, with photovoltaic panels facing north and a turbine on top, is something of "a parting gift" from retiring city councillor Chris Teo-Sherrell.

The portfolio holder for environment and sustainability said it had taken about a year to bring the project to fruition after he heard about the Spanish-designed street lighting units.

The concept appealed not just because it was clean and green, but also because it had potential to save money.

The manufacturers' website said the system could provide 20 per cent savings over conventional street lighting systems.

Teo-Sherrell said the technology had potential to be used in public parks, on walkways, and possibly in new subdivisions to avoid the cost or practical difficulties of laying power cables.

The units were able to generate and store about four days of energy to support them through times of low wind and sunshine hours, or could be linked to extra lights.

Teo-Sherrell said Hokowhitu Domain was chosen as the trial site because it was highly visible, in an area that was well used into the evenings, and poorly lit.

City council parks and property officer Ian Stuart said the opportunity to try the technology at no charge had to be a good idea.

Within a few weeks there would be data available from monitoring to see whether it was an efficient and practical option for Palmerston North.

"There is no talk of having this go city-wide, but it could serve well where it is hard to get connections to electricity supplies."

Teo-Sherrell has served three terms on the city council, and is standing down at October's local body elections.